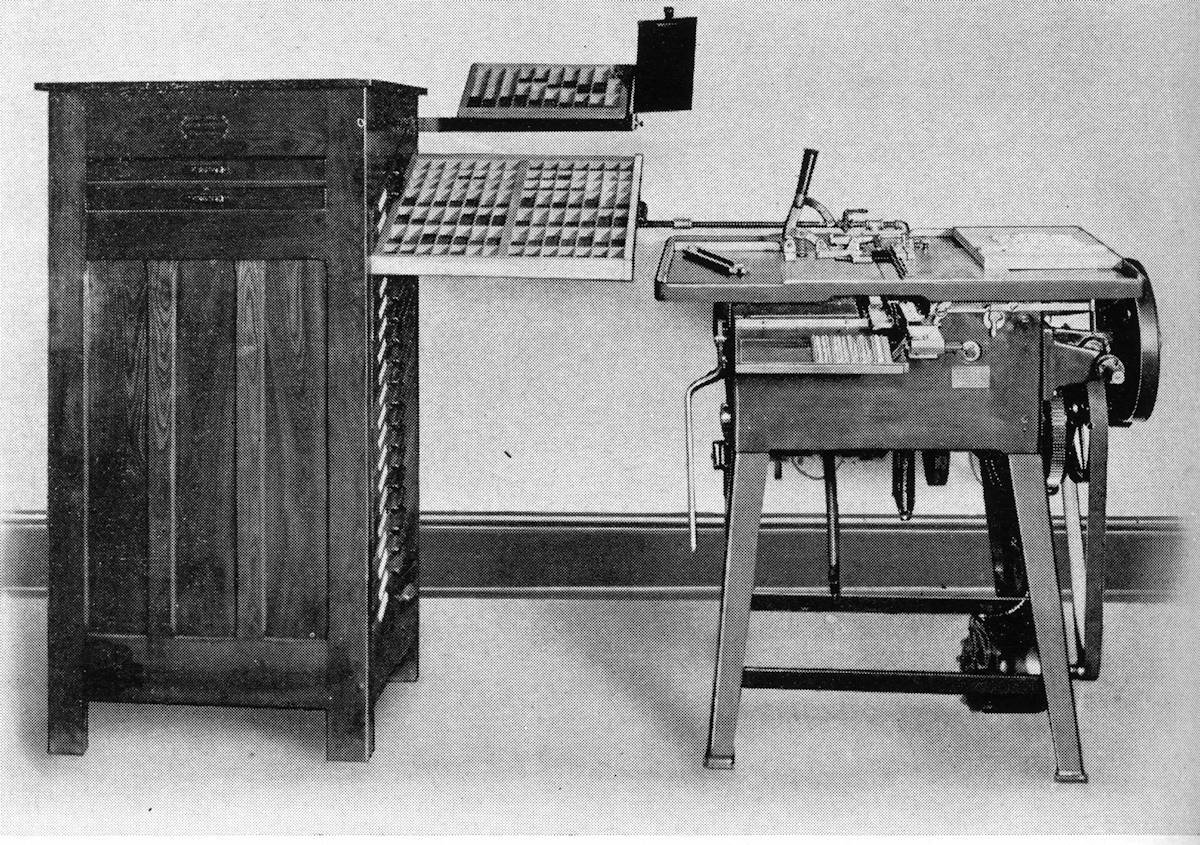 Note: The following was an email by Phil Ambrosi sent to the LetPress Forum on July 7 2015.  The letter addresses an inquiry from a member curious about the workflow procedures. Part of the original question posted to the LetPress forum is below:

I am curious about… the workflow for setting larger amounts of text. Did you set the mats, then add the spacing as, I believe, it is recommended to do? If so, where was the spacing? In the case itself or in the side case of the cabinet? Did you have it close by? How was your workspace organized? Did you fill one stick, cast, then distribute or fill multiple sticks and then cast?

We have reposted Phil’s response here and hope that you will enjoy it.

We had a Ludlow and all of our printing was done Letterpress. In my time I set and cast a lot of slugs on the Ludlow.

Our shop was located in one building but there was three levels and several doorways or archways if you prefer. Some of our mat cabinets were located an easy 50 feet from the castor and that meant a lot of walking back and forth, so when we needed mats from these cabinets, we gathered mats till the case was empty and walked to the caster and spaced the lines out and cast them and then did a cursory proofreading and then returned the mats to the case.

At one time I did a lot of business cards, most of which required more than five lines and as most of our small mat storage boxes would hold only five lines, this required a lot of walking back and forth.

We partially solved this problem by obtaining double fonts of mats as often as we could or as our budget allowed. I also made my own mat storage and transporting boxes with provision to store ten lines of mats. I still have some of these boxes and am willing to part with them for postage.

It often seemed to me that we got the most difficult typesetting imaginable. I often had a situation of where I would have an address of something like, 2222, 22nd Street. And of course the average small font of Ludlow Mats contains only four of each figure. Hence the advantage of double fonts of mats. There was lots more difficulties.

I had the job of printing some cardboard photo mounts of a posed studio photo of the Regina Judiciary, and there were lines and names of, for example, Judge Jerry Jones. And of course the average font of Ludlow Mats contains only two cap J letters. This was a very tough setting job.

Mostly I just hated setting proper names as the slightest mistake was so serious. Even a comma out of place warranted a resetting. Nuts. Mostly I would hand grab a line of Ludlow and take to the caster and insert spacing from the speciality rack that Ludlow made that was located right beside the caster and space out and then cast the line and then remove the spacing and return the mats to the case. I seldom kept the spacing mats in the Ludlow case along with the type mats.

On fussy business card orders, I would hand grab the mats and space out and then cast the line, and then return the line of spaced out mats to the holding or storage tray and cast the next line and so forth till the job was all cast. Some of these wordier cards had as many as ten lines. I would then make up the form and put on the press and pull a press proof of finished job quality and carefully proof read. If there was a mistake, it was easier to just correct the required line and insert into the form and re-lock up and proof read the form and do this till I got it right. My worst record in this endeavour required four tries to get it right.

Please note here that I did a lot of high end and high quality business cards. In my payday, I was working in over 20 different languages and I set all of the so called Latin alphabet languages myself. I tried so hard to obtain Crylic, but the only time this came up for sale, I did not have the money. It is just as well, Crylic is really hard to set, unless you know the language.

One more thing that I did a lot of was complicated and very complicated tabular setting and printing. I did this in two methods. First if the job was not too complicated, I cast this up in one line using the specialty tab mats that Ludlow made for this purpose. And I did at one time have very large fonts of such mats in all the sizes.

This was tough setting and I often had to use multiple sticks of mats and cast a line then the headers and then cast another line and so forth. I still have some samples (printed sheets) of this kind of tabular casting. I would be glad to mail out some samples. Postage would be appreciated.

The second method was to set the job for two runs and run the job to dead register and print the job twice. It was often easier that way. I do remember some receipt jobs that were real dillies. One was five on a sheet in trip with the bottom sheet of heavy and expensive Ledger stock. And of course the job was perforated and the bottom Ledger sheet was larger than the original and duplicate and required extra perforating. I always tried to get the customer to order more books of this job, but the most they would order was four books. The price per book was just staggering, but they would not order more.

So, what more to say? I also did a lot of small and one might call it miniature type casting. I had several fonts of 4 point type, but towards the end, I had to stop setting and casting this as I could no longer see the type without a magnifying glass, and it was such slow going.

I did set one children’ book. It was a Christmas Story and I printed a limited edition of 1200 copies. It was not a really long story. It required 24 pages of 18 pt Admiral on 22.5 em slugs. This job was run in red and green ink.

May 20
Wrapping a ParcelLenovo Thinkpad W520- Great Laptop, Yet a Fire Hazard?