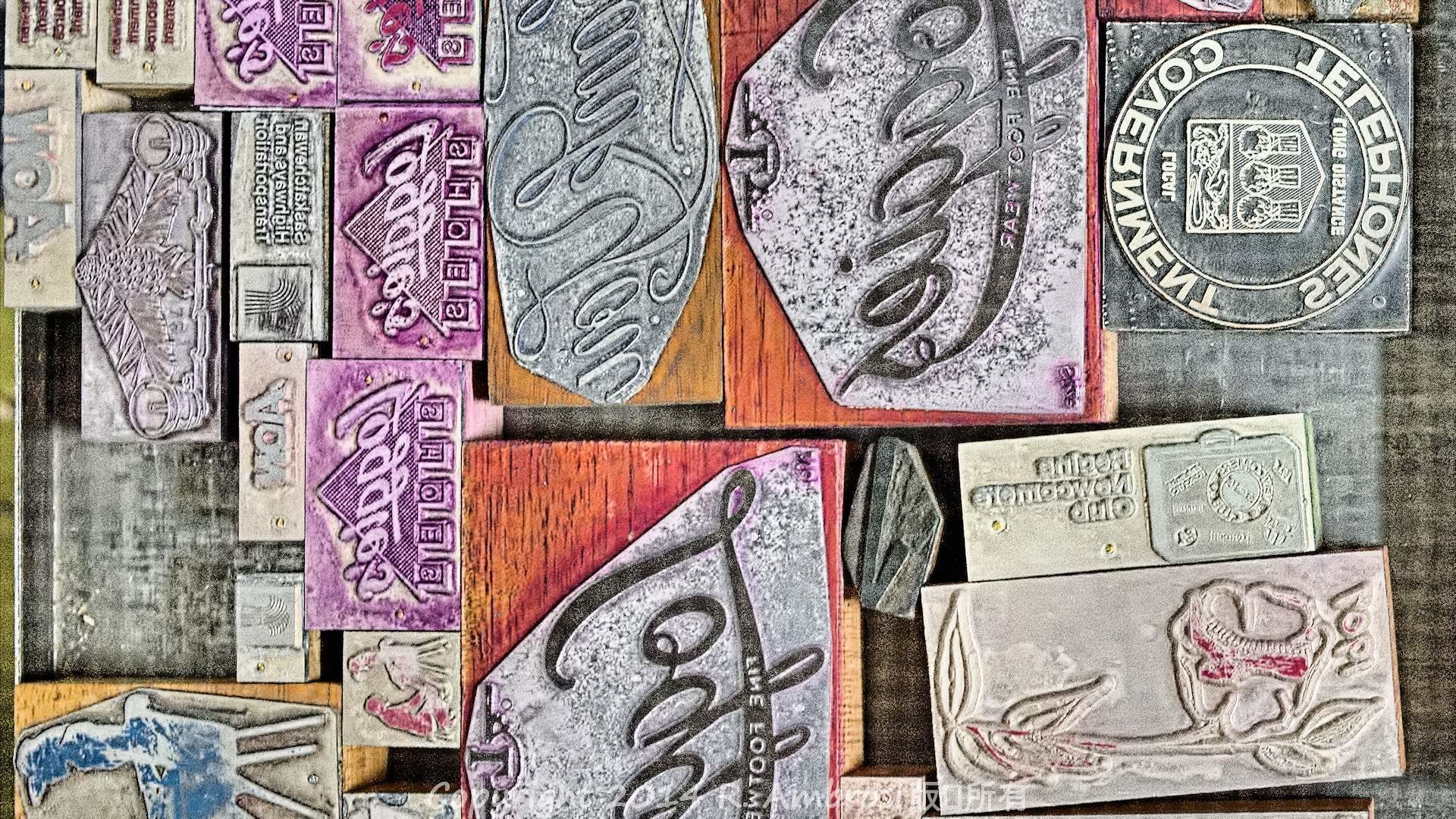 One of the things that made letterpress printing more expensive right from the beginning was the need for illustrations and or pictures and or hand or machine engravings.

When I first started my apprenticeship we did buy and use cuts that were etched out on a thin sheet of zinc and then nailed to a piece of wood to bring up to type high of 0.918 inches so that it could be printed.

All the cuts that we had made, were of this kind. The zinc was called 16 gauge and was just plain sheet zinc. The reason for this metal was that it was low in cost and relatively easy to etch with acid. And this metal was easily available. Other metals were available, but costs were high and these metals were harder to etch.

For most of our shop history there was only one engraver in Regina and this trade was called Photo Engraving. Then for a year or two there was two such shops, but there was not enough work in Regina to support two such companies and so the second shop closed and then the first shop and then an entirely new shop was started up. I am not entirely sure of the time sequence of this starting and stopping, but mainly this were so.

This thin sheet of zinc was coated with a light sensitive emulsion and then was exposed to light projected through a negative and then put into an etching machine and sprayed with nitric acid. After a few thousands of depth of etching this sheet was removed and coated with some sort of a fixer to prevent the acid from under cutting the metal and thus ruining the image.

This fixing, and I am not totally sure that I am using the correct word here, was done more than once and after a bit the acid etching process was completed and the zinc sheet was removed from the etching machine and washed off with tap water. Once dry it was nailed to a block of wood with small finish nails that were about half an inch long. A very small diameter pilot hole was required for this nailing as it was not possible to hammer a nail through the sheet of zinc as this metal was too hard.

Great care had to be taken to drive this nail so as not to damage the image on the zinc sheet. Small 6 to 8 oz. hammers were used along with a nail set. And for those of you who do not know what a nail set is, this is a small round punch just a little bigger in diameter than the nail that you are driving and further this nail set is cupped on the delivery end to at least in part get a good purchase on the nail that you are driving. The driving end was enlarged and mostly was square.

This was a good method of making engravings or cuts as we called them. In some shops these were simply called zincs or zincos. However this was a mistake to call them this as I talked to fellows in the trade who called these sinkcos. They called these cuts sinkos as that it what this name sounded to them and no one ever told these men other wise.

The big problem with using zinc as an engraving metal was that you needed nitric acid to etch this metal and this is a dangerous acid and great care must be taken to handle and ship this acid. Also the disposal of this acid can be a big problem. Once the acid has been used for a few engravings it looses it’s strength and then it is called ‘’spent acid,’’ and must be disposed of.

Most everyone that I ever heard of just dumped this spent acid down the sewer. Well the problem with this is that the acid often was not totally ‘’spent,’’ and all too often this would erode the sewer pipes and cause bigger problems. The solution to this problem was to install lead piping but this was so hard to solder together because it melted very quickly. Soldering lead pipe is really hard because it is a case of now you see it and now you don’t.

Soldering lead pipe was called lead burning and required real experts and a lot of practice to be able to to this.

Toward the end of this acid etching method the health and workers authorities insisted that spent acid be recovered and returned to the suppliers of this acid to be safely disposed or refined and made into new acid.

We did at one time try to get into the making and etching of cuts, but the equipment was way too expensive and so we just continued to buy these cuts from the various photo engravers.

Then someone discovered that magnesium could be etched with much weaker acid and the etching process was just as good and way less dangerous. Problem was that magnesium will deteriorate and zinc will not. But every maker switched to magnesium any way. Cheaper, faster etch time and easier and safer.

The story goes on from here to the use of copper for etching. Copper is somewhat more expensive than magnesium and in fact some would say, way more expensive than magnesium. Toward the end of my printing I wanted to go to copper, but most of my work would just not allow for that, so I stuck with mag. cuts only I ordered the thicker mags. that were called 11 point engravings.

There is still much more to this story about cuts, but I am tired now and will write more later all about stereotypes and how these were made and how many different kinds there were.

For sale are a number of engravings of images, illustrations, government and commercial logos. Most of these engraving images are made of a thin sheet of magnesium attached to a block of wood.

The ink-stained time-worn appearance of these engravings reveals the technology employed by many decades of letterpress craftsmen who produced commercial and government documents and forms, newspapers, wedding and funeral invitations, and all forms of stationery essential for the functioning of society.

The cuts/engravings are in excellent condition and make fascinating conversation pieces that reflect the era in which they were made. They can be framed individually or in eclectic groupings, used in sculpture, incorporated into art pieces, or used for letterpress printing.

HISTORY
Zinc and Magnesium cuts were used in letterpress printing to print an image, either text or a drawing or photo) onto paper. Formerly, all printing was done using letterpress and all images/illustrations and pictures were printed using these engravings. While many engravings were acid-etched into zinc or magnesium sheets, some were were etched by a mechanized process. The cuts or engravings for sale here were mostly acid-etched into zinc or magnesium blocks. Several of these engravings that were commissioned by various groups 3-40 years ago.

A number of the engravings feature the iconography and images of First Nations people.

PRICES
Prices range from $20 for the small etchings, $50 for medium sized,  over $100 for large or very rare etchings.

CONDITION
Most of these cuts are between 30-40 years old.

Gallery of Zinc and Magnesium Cuts

Here’s an assortment of photos of some of the magnesium cuts and zinc cuts I collected over the years.