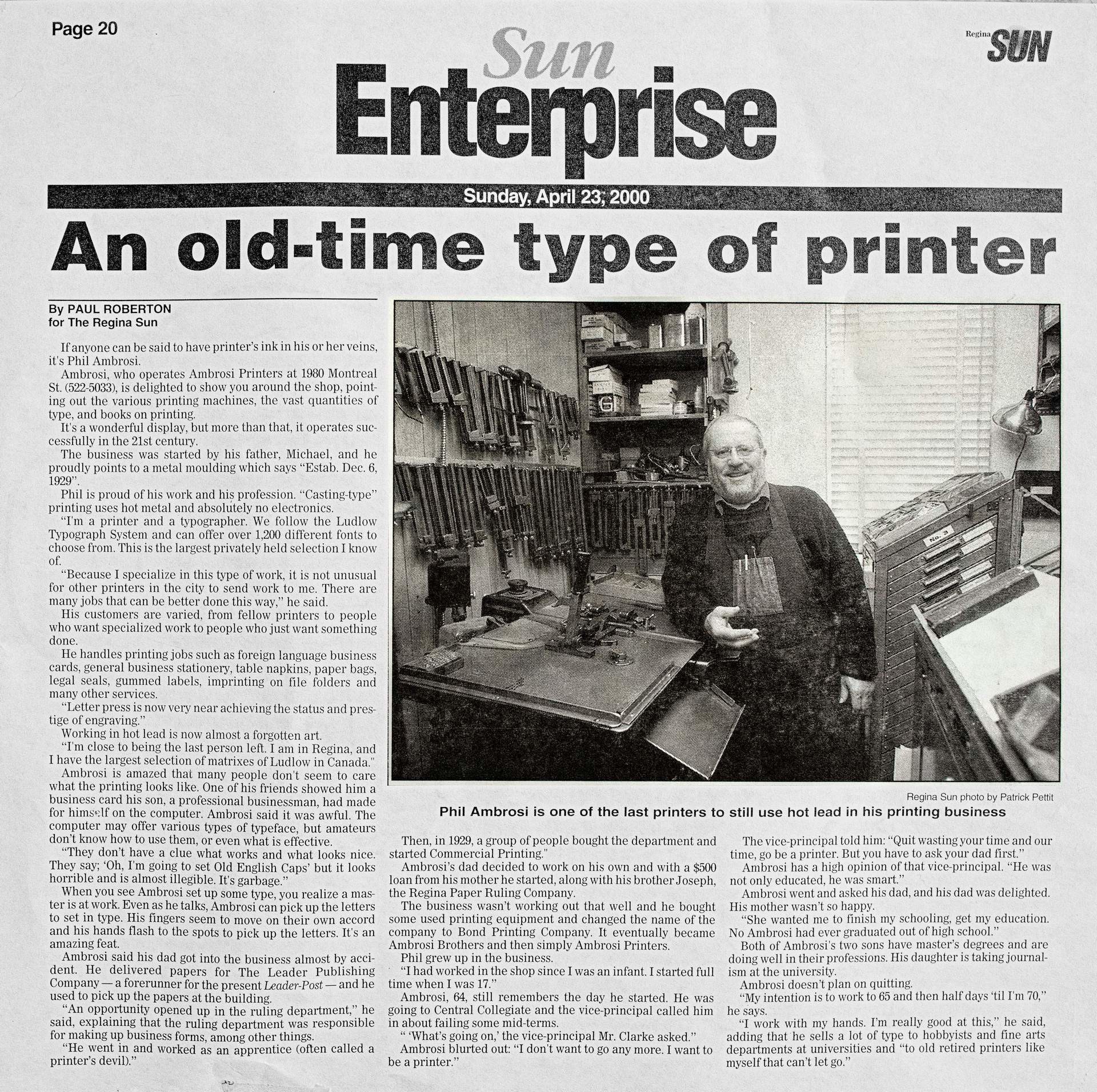 This article was originally published by

The Regina Sun.
2000, April 23, Sunday.
The original article was published before the internet and does not seem to be available anywhere online. The version below has been digitized from an newspaper clipping.

An Old-Time Type of Printer.

By PAUL ROBERTON for The Regina Sun

If anyone can be said to have printer’s ink in his or her veins, it’s Phil Ambrosi.

Ambrosi, who operates Ambrosi Printers at 1980 Montreal St. (522-5033), is delighted to show you around the shop, pointing out the various printing machines, the vast quantities of type, and books on printing.

It’s a wonderful display, but more than that, it operates successfully in the 21st century.

The business was started by his father, Michael, and he proudly points to a metal moulding which says “Estab. Dec. 6, 1929”.

Phil is proud of his work and his profession. “Casting-type” printing uses hot metal and absolutely no electronics.

“I’m a printer and a typographer. We follow the Ludlow Typograph System and can offer over 1,200 different fonts to choose from. This is the largest privately held selection I know of.

“Because I specialize in this type of work, it is not unusual for other printers in the city to send work to me. There are many jobs that can be better done this way,” he said.

“Letter press is now very near achieving the status and prestige of engraving.”

Working in hot lead is now almost a forgotten art.

“I’m close to being the last person left. I am in Regina, and I have the largest selection of matrixes of Ludlow in Canada.”

Ambrosi is amazed that many people don’t seem to care what the printing looks like. One of his friends showed him a business card his son, a professional businessman, had made for himself on the computer. Ambrosi said it was awful. The computer may offer various types of typeface, but amateurs don’t know how to use them, or even what is effective.

“They don’t have a clue what works and what looks nice. They say; ‘Oh, I’m going to set Old English Caps’ but it looks horrible and is almost illegible. It’s garbage.”

When you see Ambrosi set up some type, you realize a master is at work. Even as he talks, Ambrosi can pick up the letters to set in type. His fingers seem to move on their own accord and his hands flash to the spots to pick up the letters. It’s an amazing feat.

Ambrosi said his dad got into the business almost by accident. He delivered papers for The Leader Publishing Company — a forerunner for the present Leader-Post — and he used to pick up the papers at the building.

“He went in and worked as an apprentice (often called a printer’s devil).”

Then, in 1929, a group of people bought the department and started Commercial Printing.”

Ambrosi’s dad decided to work on his own and with a $500 loan from his mother he started, along with his brother Joseph, the Regina Paper Ruling Company.

The business wasn’t working out that well and he bought some used printing equipment and changed the name of the company to Bond Printing Company. It eventually became Ambrosi Brothers and then simply Ambrosi Printers.

Phil grew up in the business.

“I had worked in the shop since I was an infant. I started full time when I was 17.”

Ambrosi, 64, still remembers the day he started. He was going to Central Collegiate and the vice-principal called him in about failing some mid-terms.

“ ‘What’s going on,’ the vice-principal Mr. Clarke asked.” Ambrosi blurted out: “I don’t want to go any more. I want to be a printer.”

The vice-principal told him: “Quit wasting your time and our time, go be a printer. But you have to ask your dad first.” Ambrosi has a high opinion of that vice-principal. “He was not only educated, he was smart.”

Ambrosi went and asked his dad, and his dad was delighted. His mother wasn’t so happy.
“She wanted me to finish my schooling, get my education. No Ambrosi had ever graduated out of high school.”

Both of Ambrosi’s two sons have master’s degrees and are doing well in their professions. His daughter is taking journalism at the university.

Ambrosi doesn’t plan on quitting.
“My intention is to work to 65 and then halfdays ‘til I’m 70,” he says.

“I work with my hands. I’m really good at this,” he said, adding that he sells a lot of type to hobbyists and fine arts departments at universities and “to old retired printers like myself that can’t let go.”