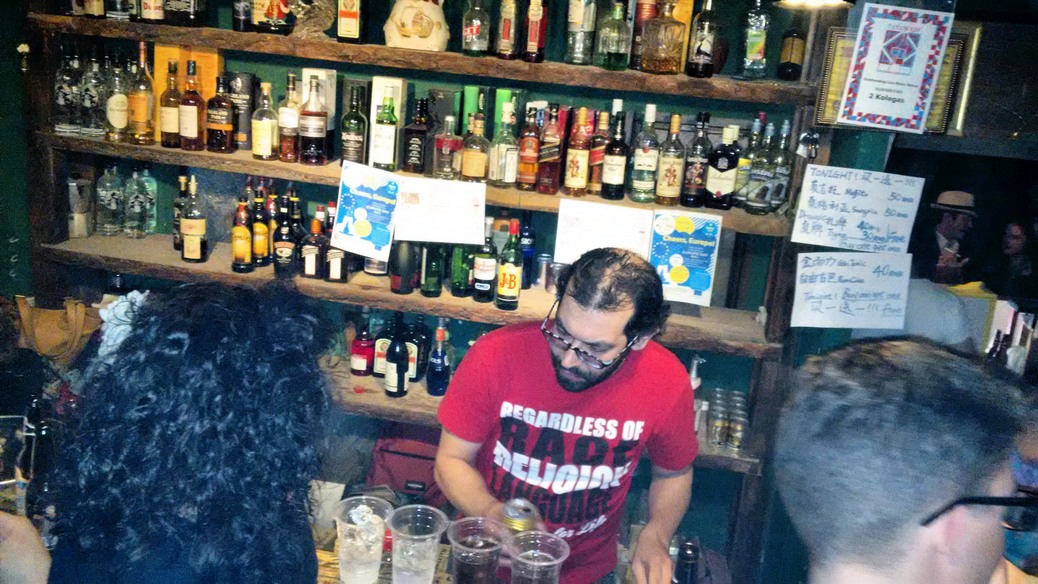 I’m not much of a party-drinker type. Those days are long gone- in fact, I’m not sure I ever went through any such phase. I never liked that type of “night life” even when I just began my undergraduate degree and university life was centered around partying. When my wilder friends at that time wanted to go drinking (which was nearly every night), they tried for several months to get me to go with them. My usually reply “I have to train in kung-fu tonight… sorry I can’t go” wore thin after a while. They wondered why I had to train every night of the week (we did), and eventually gave up the notion that they would convert me to their lives of debauchery, drinking and mad affairs.

Fast forward to my time in Beijing in 2014. One weekend, perhaps during a time when we PhD friends were all feeling the stress of academic life, my German friend Kai suddenly called me and asked me if I’d like to go to an underground fighting party. I was dumbfounded– Kai had given me the impression he was the most scholarly guy I had met in years, and he seemed like a quiet, peaceable guy who would certainly shy away from violence. I was nervous about going to such a party, but Kai was extremely enthusiastic and convinced me and another friend, Matthias to join him.

The party was to be held in the basement of a building under construction and was very far from where I lived in northwest Beijing. Traveling for 2 hours by subway, I arrived at the appointed time and as I walked along the murky road, it began to rain. Following Kai’s instructions, and the GPS map in my phone, Kai and Matthias met me on the street. Matthias sounded a bit concerned “The place is crazy Ray… its in an unfinished building”.  Indeed it was. After having our tickets checked by a huge tough-looking western guy at the door, we made ourselves into the crappy building. It was the perfect place for a fighting party.

Still under construction, there was no electricity in the building and so the organizers had set up makeshift lighting with generators and batteries and candles.  Making our way into the basement, electronic pop blasted from the dark shadows and we could see a non nondescript crowd of people milling about a bar, and dancing on the sand dance floor in front of a large stage with laser lights.

We made our way to the bar first. After all, the ticket price included all we could drink. All of us noticed the incredible cheesiness of the drinks– no wonder they were “free”. The beer was “Playboy” brand. More famous for their skanky magazine and tacky line of clothing in China than beer, we had some hesitations about actually drinking it. But we’d already paid, and the idiotic bunny ears and ridiculous 70s typeface of the Playboy logo was enough to make us want to try. And try we did! We each consumed quite a number of bottles of beer before quite skeptically sampling the rye and coke set out in vast tubs of ice.

Eventually the main event began at around 1am– boxing. To my dismay and relief, the fighting was not bare-knuckle fighting but rather boxing. A Beijing boxing club was holding the party as a fund raiser and, rather cleverly, decided that they’d get more customers if they showed the civilized aspects of boxing rather than present a cage fight blood bath. The boxers that fought had obviously sparred together many times before. Their moves were deliberate, careful and deft as they dodged each other’s punchs, landed carefully timed blows that were not too hard. Their ability to promptly move clear of their opponents punch was very impressive, and their footwork was light and fast. Overall, it was quite impressive. Later, after two or three exhibition matches, they asked if anyone in the audience would like to spar. I wanted to actually… but worried that I may have had too many drinks, and also didn’t want to get my glass nose flattened if things did not go as well for me as I hoped they might.

I looked at Kai. Suddenly it was clear- he too was thinking of going in the ring. It was then that I had a totally shocking revelation– When I asked Kai if he had ever trained in any martial art or fighting art before, he revealed that back in Germany he had joined a bare knuckle fight club. And even more shocking to me was the fact he had fought in it for over a year! My scholarly gentle buddy was no softie academic but a tough-as nails  bare knuckle fighter. Looks and exterior appearances can be deceiving indeed. Kai recalled how difficult it is to actually punch someone hard knowing the danger of the fight, and this is why none of them ended up badly injured.

Matthias and I milled though the crowd, gawked nice-looking women, chatted endlessly about the event, our research, life in Beijing, the Playboy beer, and most importantly whether the rye whiskey was real or if it was just industrial alcohol with caramel food colouring and vanilla added.

Hungry, we all moved upstairs to the hot-dog stand where some civilized chaps and girls were serving over-priced hot dogs (20 yuan each). Shortly after munching down a fairly tasty hot dog with plenty of fried onions and ketchup, we decided to call it a night. It was probably nearly 3 am when we set off walking and eventually made our way to a McDonalds where we spent a few more hours eating hamburgers, greasy fries and enjoying great conversation and laughter.  Life of a PhD student is not all work.  Especially when the time is spent with great friends.

Below are photos of the night’s events. The photos are not clear- shot on my Blackberry Z30 with a shakey hand in very poor lighting.